Medal of Honor Recipient Ernest E. West Passes Away at 89 Earned Nation’s Highest Award for Valor during the Korean War

MOUNT PLEASANT, S.C. (May 3, 2021)— The Congressional Medal of Honor Society regretfully announces that Ernest E. West, Medal of Honor recipient, passed away Saturday, May 1, 2021, at the age of 89.

In October 1952, during the Korean War, Private First Class West had volunteered to join a combat patrol near Sataeri, Korea, looking for an enemy outpost. West, his squad leader, and two other soldiers were scouting ahead of the main group when they were ambushed. His severely wounded squad leader kept up the fight as West moved through heavy enemy fire to reach his exposed position. West used his own body to shield the officer before placing the wounded man over his shoulder and retreating. As he did so, he continued the fight with two carbines, one in each hand. After placing his leader in the care of others, West returned under heavy hostile fire, to retrieve the two others who lay wounded and exposed in the impromptu battlefield. Two of the men he pulled back later lost a leg, but all eight in the squad survived. West, who was burnt and shot, lost his left eye.

A year after that battle, West was notified via telegraph that he was to receive the Medal of Honor. His first thought was to refuse it. In an interview later, he said: “I’ll tell you this, I turned it down. I wasn’t gonna go get it. I thought everybody ought to have one… I did not consider myself a hero.” His uncle convinced him to accept the honor.

President Dwight D. Eisenhower presented West with the Medal of Honor on January 12, 1954, at the White House. Eisenhower was reported to say “Please accept the admiration of an old soldier” as he placed the ribbon around West’s neck.

West was born in Russell, Kentucky, on September 2, 1931. Orphaned at nine years old, he grew up in the Methodist Home in Versailles, Kentucky. He played basketball and football at the local high school, and was noted as “an awfully good, sweet boy” by the wife of the Home’s director.

West later credited his time at the Home as teaching him the value of brotherhood: “I was doing what I was supposed to do… it was because of brotherhood we all got back. We didn’t leave nobody. I was raised that way and I always figured that someone would come to get me if it was to happen if I got down. One of ours would have come got me.”

“I think, today, in this day and time, if we would think of brothers and sisters, we’d have a better society to live in…We need to be good to people… we’re all the same…We’re Americans.”

He is survived by his daughter and numerous family and friends.

There are 67 recipients alive today. 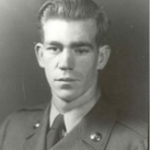