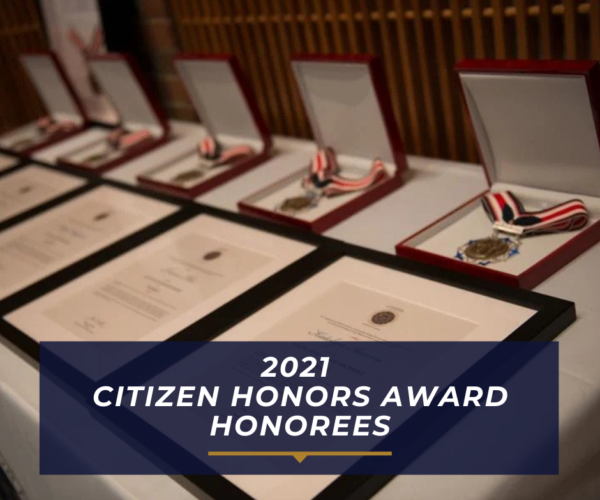 The Citizen Honors Awards highlight those who have demonstrated courage and bravery when it comes to serving others. Whether it is through a single instance or from continued service, these ordinary people embody the American spirit through their extraordinary actions.

Each year, a nationwide search takes place to select five U.S. citizens and one organization to receive the awards. The first panel to review the nominations is assembled by the Congressional Medal of Honor Society. They select national finalists, and then the work is passed on to a panel made up exclusively of Medal of Honor Recipients. The Recipients select those who will receive the Citizen Honors Awards.

On March 25th, 2021, National Medal of Honor Day, CMOHS announced the 2021 Citizen Honors Awardees. These five individuals and one organization exemplify the values embodied in the Medal of Honor. We are proud to present them to you.

Raina exemplified courage and bravery when she sacrificed her life to rescue three young children when they were swept over the Clearwater Dam at Clearwater Lake. We honor her memory and service to others with the Single Act of Heroism Award.

When a friend’s business was attacked by looters, David jumped into action and was mortally wounded while attempting to save the store. For his bravery and kindness towards others, he was selected for the Single Act of Heroism Award.

In 2018, Chris used his body as a human barricade to keep an active school shooter out of his classroom. Chris sacrificed his life for his fellow students and saved the lives of many in his classroom that day. We honor his memory with the Young Hero Award.

Aidan and James created the FarmLink Project in response to a nationwide crisis during a global pandemic. Their grassroots initiative links farmers with surplus products to communities in need. For their selfless service, they were selected for the Service Award.

Charles was selected for the Youth Service Award for donating his time and money to the development of The Warrior Program, a virtual training program for Special Olympics Maine. Charles lives with cardiac limitations and was determined to help other athletes, like himself, to stay immersed in sports through Special Olympics Maine.

For its outstanding service to our military, their families, and first responders, The Gary Sinise Foundation was selected for the Community Service Hero Award. Their initiatives include the creation and support of unique programs designed to strengthen and build communities centered around defenders, veterans, and first responders.

These Americans have gone beyond the call of duty in their service to others and have embodied the spirit and values that we, as a country, hold close to our hearts. We are proud to present them with these awards.

Medal of Honor | Inspiring A Nation of Citizen Heroes

The Congressional Medal of Honor Society is a non-profit organization with the mission of perpetuating the legacy of the Medal of Honor and its Recipients. The Society’s efforts are assisted…

Thank You to Our Community Service Awardees

Every year, the Congressional Medal of Honor Society recognizes ordinary people who do extraordinary things through our Citizen Honors Awards.  Through a single moment of outstanding bravery or selfless service…