During the U.S. Civil War, many Medals of Honor were awarded for capturing the enemy’s flag. George W. Reed was the recipient of one such award on September 6, 1864, when the U.S. Army published a General Order awarding him the Medal of Honor to for capturing the flag of the 24th North Carolina Infantry. But why was capturing a flag so impactful?

The Weldon Railroad connected Richmond to the key port of Wilmington, North Carolina, the only Confederate seaport that remained open in mid-1864.  General Ulysses S. Grant had tried and failed to gain control of the railroad in June, 1864, and was attempting once again a month later.  If the Union could control the Weldon Railroad, General Robert E. Lee would be deprived of badly needed supplies coming from the south and would be forced to cobble together a makeshift supply line utilizing less efficient, and slower, wagon trains.  In a four-day fight that August, Grant would gain his objective.

As kids many of us played a game called Capture the Flag.  To us it was fun, but to a soldier during the Civil War, capturing a flag was deadly serious.  In even the smallest skirmish during the Civil War, a thick cloud of gunsmoke quickly obliterated the action on the battlefield, making it impossible to see any directives ordered by an officer.  Thus, the man carrying the regimental flag, the color bearer, became vitally important.  Every soldier on both sides knew the importance of always knowing where the flag was and used the color bearer’s position as his own, moving forward or back and maintaining order, depending on what the color bearer did.  Without the color bearer, chaos took over.

Both sides recognized very early in the war that if they could kill the color bearer, or at least capture his flag, the enemy would be at a tremendous disadvantage.  Color guards, those immediately around the color bearer, protected the flag with their lives.  It took a brave man to carry the colors, and few of them made it through the entire war unscathed.  Conversely, those who tried to capture a flag also often paid with their lives, but occasionally it was accomplished.  One of those who captured an enemy flag was George W. Reed.  Although he had proven himself in battle many times, this time Reed did not depend on his bravery.  He did it with his brains.

Reed was born in 1831 somewhere in Cambria County, Pennsylvania.  The records do not indicate specifically where, but it is known that he was living in Johnstown when the Civil War broke out.  He enlisted in Company E of the 11th  Pennsylvania Volunteer Infantry, a regiment that would fight valiantly in such battles as Gettysburg, Antietam, The Wilderness, Fredericksburg, Chancellorsville, and many others.  Their nickname reflected their reputation:  The Bloody Eleventh.

On August 18, 1864 the 11th Pennsylvania, part of Major General Gouverneur K. Warren’s Fifth Corps, reached the Weldon Railroad and began destroying the tracks.  Initially opposed by only a small contingent of Confederate cavalry, Reed and his comrades built fires to heat the rails, then twisted the softened steel into the shape of a Maltese cross, the symbol of the Fifth Corps. Twisting the rails had the dual effect of rendering them useless while also mocking the Confederates.  Southern reinforcements, however, launched their own counterattack, and Reed’s Company E took heavy casualties, including two men killed and many others wounded by friendly artillery fire.

Fighting continued on August 19 but heavy rains the next day caused both armies to hunker down, with little serious fighting taking place.  On August 21, 1864 fighting resumed, with the battered 11th being held back in a position where they were not expected to encounter heavy fighting.  George Reed was working his way through thick woods in the summer heat, made even more uncomfortable by a steady rain, when he stumbled upon a group of Rebels from the 24th North Carolina Infantry, including their color bearer.  Outnumbered, George was immediately taken prisoner.  Knowing the odds of surviving a Civil War prison camp were against him, he quickly pointed out that he knew the men were lost and that they were about to walk into the Union lines, where they would probably be killed.  He promised to escort them safely through the line if they surrendered to him.  The Confederates huddled briefly, then agreed to surrender to the man they thought they had captured just a few moments earlier.  Taking their flag, George took his prisoners back to the Union side, where his actions were highly praised.  A few weeks later, on September 6, 1864 he was awarded the Medal of Honor.

George Reed died on December 21, 1906 and was buried in Grandview Cemetery in Johnstown.  However, somehow the inscription on his government-issued headstone deprived him of the honor he so richly deserved.  Not only did it not mention his Medal of Honor, it listed him as a Confederate soldier.  The error went uncorrected for nearly a century until descendants were able to get it corrected.  On November 11, 2006, Veterans Day, a new stone was dedicated in the presence of several spectators and Civil War Reenactors, and Reed finally received his long overdue credit. 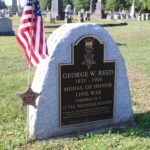 Following the defeat of the Confederate army at Lookout Mountain, Tennessee, on November 24, 1863, Confederate General Braxton Bragg reassembled his troops on nearby Missionary Ridge. Rising some 330 feet…

On April 19, 1945, Henry "Red" Erwin displayed unprecedented, unforgettable valor for 22 seconds - the time it took for him to hand-drag an activated phosphorus bomb, burning at up…

Seventy-seven years ago, Medal of Honor Recipient William W. Galt died in his moment of valor on May 29, 1944. This piece was written by Lowell Silverman as part of…

On May 31, 1918, during World War I, a troop transport ship, the USS President Lincoln, was torpedoed by a German U-boat on its way back to the United States,…