Following the defeat of the Confederate army at Lookout Mountain, Tennessee, on November 24, 1863, Confederate General Braxton Bragg reassembled his troops on nearby Missionary Ridge. Rising some 330 feet above the city of Chattanooga with extremely steep sides, it presented a nearly impregnable position. On November 25, 1863, Union forces under Major General Ulysses S. Grant launched a spontaneous charge up the slopes under heavy Confederate fire to drive the Southerners off the ridge. The fighting was bloody, with the Union army suffering nearly 6,000 casualties and the Confederates slightly more. With Chattanooga now under Union control, the city became an important supply center for Sherman’s Atlanta Campaign the next year.

As would be expected under the conditions of the steep terrain, the battle at Missionary Ridge was not going well for the Union army. The well entrenched Confederate army was inflicting a heavy toll on the Federals. The men of the Union Army of the Tennessee were still arriving on the field, and under Major General William T. Sherman they had become bogged down while attacking the rebels’ right flank. At the same time, the XI and XII Corps, under the overall command of Major General Joseph “Fighting Joe” Hooker, had encountered their own problems on the left. Before even reaching their objective they had been thwarted before crossing Chattanooga Creek because the Confederates had burned a bridge.

A frustrated Major General Ulysses S. Grant ordered Major General George H. Thomas’s Army of the Cumberland to attack the center of the Confederate line. On Thomas’s order, 60 regiments advanced under heavy artillery fire from the top of the ridge. One of those regiments was the 15th Indiana.

Thomas’s troops were ordered to capture the rebel rifle pits at the base of the ridge. However, conflicting orders issued by Thomas’s subordinates led to confusion, with some of the regiments believing they were to take the rifle pits and hold their position, while others thought they were to advance as far as they could.

Under the cover of choking gunsmoke, the 15th Indiana was among those that advanced, unauthorized and unexpected, as it would turn out. They soon encountered heavy fire that caused the men to drop face down to the ground, made muddy by heavy rains the day before. Major Frank White screamed above the din, “Men, for God’s sake, forward!”

Color-Sergeant George L. Banks leaped to his feet without hesitation, waving the regimental colors and exhorting his men to follow him. Banks had already suffered a relatively minor but painful wound to his left hand, and before he could lead his men very far he was struck in the chest by a minie ball. Stunned, he was knocked to the ground, his already tenuous grip on the flag relaxing. Unable to move, he felt someone grab the colors as he tried to force air into his lungs. Banks could not discern who it was that picked up the flag, but he was able to see the man fall almost immediately. Before Banks was able to fully regain his senses, three more men would carry the colors.  All three would also fall. Of the four who took the colors after Banks received his second wound, two would be killed and two wounded badly.

As Banks slowly regained feeling in his body and felt his senses returning, he assessed his second wound. He immediately recognized that the bullet had taken a fortuitous path, passing through two letters and a novel that he had stowed inside his coat. The wound, which would have been fatal had it not been for the presence of the novel and letters, was bloody and painful but one that would still allow him to stand and move forward.

Still a bit shaky from the effects of his wound, he made his way to the side of the last man to have picked up the flag. He caught up with the colors just as the unfortunate man fell. Banks hastily reached for the staff, grasping it just before it reached the ground for the fifth time in the charge. Hoisting the flag once again, he urged those around him to follow him to the top of the mountain.

Approaching the ridge, Banks and the rest of the 15th Indiana dropped to the ground when they saw the rebel guns trained on them. As soon as the volley was released, Banks rose to his feet, with the rest of his company doing the same. Before the Confederates could reload, the Federals reached the summit, with Banks leading the way. As he began to plant the colors he received a third wound, this one to the head. Of the eight regiments in the 2nd Brigade of the 2nd Division, IV Army Corps, Banks’s bullet-riddled flag was the first to be planted on the parapet. The unauthorized assault forced Bragg to retreat, ending the battle for Chattanooga.

Banks would recover from his wounds and live to age 84. On September 28, 1897, he was presented with the Medal of Honor for his actions at Missionary Ridge. 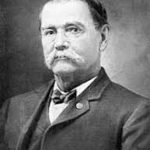