When we think of military heroes, most often the Rambo-type infantry man comes to mind.  Rambo, however, never had a red cross on his helmet. Seventy-nine medical personnel have been awarded the Medal of Honor, our nation’s highest award for valor in combat. One of these is combat medic, SP5 Clarence Sasser.

Clarence Sasser was born in a small rural community in south Texas in 1947. He grew up on farm with his mother, step-father (who was a deacon in the church), two natural siblings and four step-siblings. The family did not have a lot of money: “things were tough … we always had plenty to eat because we were farmers – we raised animals …  maybe not a lot of money, but we … always have plenty of food” responded Sasser in an interview with the Veterans History Project (VHP). He was in one of the last segregated classes at his highschool, where he played football and graduated at the top of his class in 1965.

In the fall of that year, Sasser started classes at the University of Houston as a chemistry major but lack of money became a problem and he was forced to take a job and attend school part-time. He immediately lost his student deferment and his draft number came up; Clarence Sasser voluntarily enlisted in the U.S. Army in June 1967.

Sasser was assigned to Ft. Sam Houston in San Antonio, Texas, where he trained as a medical aid man. In an interview with the U.S. Army Medical Department (AMEDD) in 1987, Sasser said he “had entertained hopes maybe of becoming a physician … [and] being sent to medical corpsman school sort of filled a little bit of that desire.”

Sasser arrived in Vietnam in late September as a private first class and less than one week later participated in a night patrol which he described as “quite scary, hairy, I guess, may be a better word for it … and I guess somehow things got a little confused, and our own base camp started lobbing mortar fire in on us. Just one of the mistakes that happened.” This incident provided Sasser the real-life experience as a combat medic that would benefit his platoon in the months to come. “The guys in my platoon felt quite good about me, and I liked that…. The guys were satisfied that they had a good medic.” (VHP)

On January 10, 1968, less than four months after arriving in Vietnam, Sasser’s Company came under heavy fire during an air assault as part of a reconnaissance mission. Almost immediately, 30 soldiers were either killed or severely wounded and Sasser sprang into action, running across an open rice paddy, from one wounded soldier to another, despite his own wounds. After treating the casualties from the initial attack, he continued to search for the wounded. When he was shot in both his legs, and could no longer run, he pulled himself through the mud using the rice stalks for leverage, until he exhausted his supplies. At that point, Sasser continued searching for the wounded to provide comfort and emotional support “which [he] thought was part of a medic’s job, too”. Sasser was the only medic in his platoon to survive the day, which he later called “the longest day of my life”. (AMEDD)

In a 2020 interview with BrazosMonthly, Sasser reminisced “My father served in the U.S. Army during World War II…. One of my fondest memories was seeing his Army uniform hanging in the closet, fully adorned with its insignia and stripes. It made quite an impression, even though he never spoke of his experiences. This is something I now understand.”

With two other soldiers, Army SFC Fred Zabitosky and Army SSG Joe Hooper, SP5 Clarence Sasser was awarded the Medal of Honor by President Richard Nixon on March 7, 1969. In his opening remarks, the President said,

I have been honored many times since assuming the Office of the Presidency of the United States, but I can say from my heart that today is the highest honor – the highest honor because I have for the first time the privilege of representing the United States of America in presenting the Congressional Medal of Honor to three of our fine young men who have fought for the cause of freedom and the cause of peace in Vietnam.

“Probably the greatest thing to me was to be in a room with [Army Maj.] Audie Murphy, [Marine Corps Col. Gregory] Pappy Boyington and [Army Gen.] Jimmy Doolittle…. These guys I had read about — guys that I’m now in their situation or I’m in their society or their group. That, to me, was something.” (Lange)

Sasser returned home to Brazoria County, Texas, where March 27, 1969 was declared Clarence Sasser Day. He was met with great fanfare and celebration for a returning hero and was presented gifts from local merchants and banks, a new car and a scholarship to Texas A&M, funded by an anonymous donor. He separated from the Army in June of that year and began classes at Texas A&M, again as a chemistry major. Unfortunately, he left school before completing his degree. In an interview in 1972, Sasser said, “Not making any excuses or anything, I didn’t do so well because I wasn’t really ready for school…. I hadn’t adjusted to living without the constant fear of death. Vietnam is rough on your nerves” (Stickney).

He married Ethel Morant, a nurses’ aide at the local community hospital, and together they had three children, one of whom preceded them in death. Sadly, Ethel was killed by a drunken driver in a tragic car accident in October 1996, at the age of 44. Years later Sasser said that raising his sons was his greatest accomplishment.

After leaving Texas A&M, Sasser worked at a petrol-chemical factory near Houston for five years and then started a new job with the Veterans Administration where he worked until his retirement.

In 2013, Sasser was inducted into Texas A&M Medal of Honor Hall of Fame, joining seven other A&M recipients, all from WWII: SSG George Keathley, MAJ Horace Carswell, 1LT Eli Whiteley, 1LT Turney Leonard, 2LT Lloyd “Pete” Hughes, SGT William Harrell, and 2LT Thomas Fowler. In his speech that day, The Eagle newspaper reported that Sasser said he was “particularly proud that my Medal of Honor is for saving lives and not taking lives…. That’s not to say I have a problem with taking lives. I do not. If it had been my job to kill that soldier over there, I would have killed him, make no doubt about that.” He also noted that one of his greatest regrets was not graduating from college. In 2014, Texas A&M awarded Clarence Sasser an honorary Doctor of Letters degree.

In an interview in 2020, Clarence Sasser responded, “I am most proud of my award of the Medal of Honor and of being an honorary doctorate and Distinguished Alumni of Texas A&M University. The permanent statue in the Military War Memorial exhibit … also ranks very high in my memories. I like to think that it proves I did my job, which was a major teaching that was central to my upbringing” (BrazosMonthly).

Listen to Clarence Sasser tell his own story here.

Kris Cotariu Harper EdD is an Army wife and the daughter of two WWII Navy Veterans. She is an educator and trainer who often writes and speaks on values demonstrated by Medal of Honor recipients.

Clarence Sasser – Medal of Honor Recipient Has Given Much to His Country, Community. September 2020. BrazosMonthy (College Station, TX). Pg. 12.

Nixon, R. M. Remarks on Presenting the Medal of Honor to Three Members of the United States Army. 7 March 1969. The American Presidency Project. 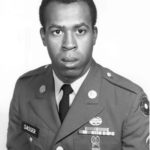 Native Americans held uneasy relationships with English, French, Spanish, Dutch, Swedish and American settlers since the arrival of the first colonists in Jamestown, Virginia in 1607. Over the next three…